This rare presentation copy of the Kitāb S'uwar al-Kawākib al-Thābitah or Book of the Constellations of the Fixed Stars by ‘Abd al-Rah'mān al-S'ūfī was made in 566 A.H./1170 C.E., in Mosul, Iraq. It came into the Bodleian Library in 1693 as part of the collections of Robert Huntington (1636-1701; MS. Huntington 212). According to current research, it is the fourth oldest extant copy of this most important and popular astronomical treatise. Not many examples of book art survive from this period making this a copy of enormous importance to art historians. In addition, the manuscript contains unique and rare illustrations including the constellation of Cassiopeia overlaid with a camel, which is not recorded elsewhere. In addition to illustrated constellations, the manuscript has finely illuminated chapter headings throughout.

The manuscript’s fragile condition had necessitated restricted access for scholars and prevented its display. During the conservation treatment areas with powdery paint layer are being stabilized as well as the paper support, where corroded by copper green pigment. Non-aqueous consolidants and adhesives were chosen to avoid any further degradation caused by copper green corrosion. A particularly fine Japanese kozo paper was used for repair giving adequate strength to the paper support whilst remaining visually unobtrusive.

After the completion of the conservation treatment the manuscript was made available for scholars and display and a digital copy was produced. 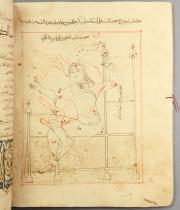 From Mexico to Madrid: the Historia de Tlaxcala, c.1581-84
All case studies

Conservation of 14th C Abbot's Register in under 2 minutes!

This video records the stages in the cleaning and repair of a cartulary made by the monks at Gloucester in 1393.