Best of the blogs

In this occasional series, we highlight some of the best blogs about conservation projects that have benefitted from NMCT grants...

The ‘Great Parchment Book’ of The Honourable the Irish Society, from the City of London Corporation’s own archives, documents the City’s role in the Protestant colonisation of Ulster. It is a 1639 survey of all those estates in Londonderry managed by the City of London through the Irish Society and the London livery companies. Damaged in a fire at London’s Guildhall in 1786, it was unavailable to researchers for over 200 years.

The book consists of 165 separate parchment pages, all of which suffered damage in the fire. Traditional conservation alone would not produce sufficient results to make the fragile manuscript accessible, the parchment being too shrivelled to be returned to a readable state. Much of the text was visible but distorted; following discussions with conservation and imaging experts, it was decided to flatten the parchment sheets as far as possible, and to use cutting edge digital imaging to gain legibility and enable digital access.

The results are recorded in www.greatparchmentbook.org, which offers users the opportunity to search the people, places and companies that are listed in the book.

This blog was a finalist in the Arts and Culture category of the UK Blog Awards 2016. 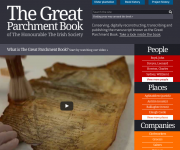 From Mexico to Madrid: the Historia de Tlaxcala, c.1581-84
All case studies

Read all about the grants awarded by NMCT in 2021 in our latest annual report. The report also includes some short case studies on projects that we have supported in the past and the many benefits that have resulted from them.